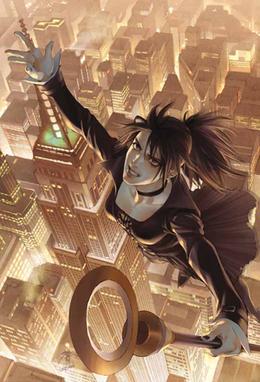 We now return to the third edition of my Interesting Characters series. And today's interesting character is Nico Minoru AKA Sister Grimm from Marvel's Runaways. She first appeared in Runaways #1, created by Brian K. Vaughn and Adrian Alphona in 2003.

Like all members of the team, she's the daughter of super powered criminals called "the Pride"; in the case of Nico, her parents are dark wizards. Finding out their parent's secret, she ran away with her fellow teens but discovered her parent's aptitude for dark magic. Whenever Nico bleeds, she summons a powerful staff from her chest allowing her to bend magic. Seeing the damage the Pride has done to Los Angeles, the kids set out to use all their special talents to make up for the sins of their parent's crimes.

The first time I read Runaways I was, rather, curious about the idea of this group of young cats and how they play in the Marvel Universe. After Vol. 1 of the complete series, it had me wanting to see more of them. In particular to Nico, she's unlike any character in comics I read in years. A Japanese American heroine wearing Gothic attire, wielding dark magic was not the one thing that made her cool in my book, but how she's very human. Being a very emotional person who seeks comfort in people after times of stress or highly emotional periods. However, regardless of this weakness, she's very open when trying to express her feelings and has been able to connect with her team mates on an emotional level.

And that's what makes Sister Grimm an entirely interesting character to me.

Posted by Andrew McQueen at 4:56 PM

Email ThisBlogThis!Share to TwitterShare to FacebookShare to Pinterest
Labels: Blog, comics, my thoughts, women in fiction